APRIL’s MEETING is cancelled. Apologies to all! 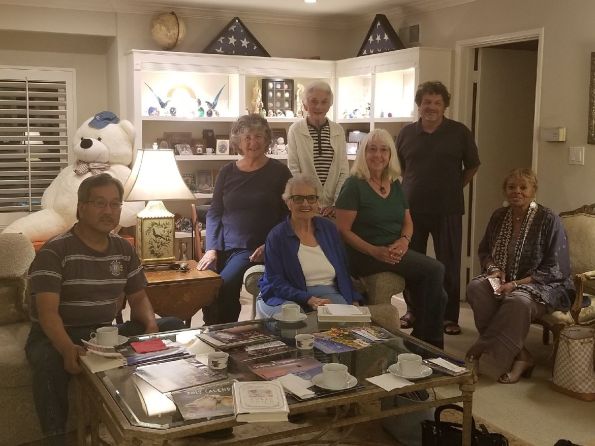 May 2020: An Unnecessary Woman by Rabih Alameddine

April 2020: Where the Crawdads Sing by Delia Owens (CANCELLED)

August:  How the Garcia Girls Lost Their Accent by Julia Alvarez

May: The Invention of Wings by Sue Monk Kidd

Jan 2019:  The Tea Girl of Hummingbird Lane by Lisa See

September 2018: My Life in France by Alex Prud’homme

July 2018:  Soul of an Octopus by Sy Montgomery

May 2018: A Closed and Common Orbit by Becky Chambers

March 2018:  Their Eyes for Watching God by Zora Neale Hurston

Welcome to the Bruins of the South Bay Book Club page. All Bruins and Bruin friends are welcome. We have men and women of all ages who participate. Each month we read books recommended by one of our members. The only Book Club rule is the book must be available at a local library.  We cover a wide range of topics and subjects: from non-fiction to fiction, from serious to funny.

The group meets the 2nd Tuesday of each month at 7:30 p.m. at the Hermosa Beach Seniors Center. Keep checking this web page for news regarding our May 2020 meeting.

To join us for a read, or for more information, please contact Mary Louise Mavian at mistoffee03@hotmail.com.  Let’s Read Together!

April: Where the Crawdads Sing by Delia Owens (CANCELLED)

May: An Unnecessary Woman by Rabih Alameddine (TBD)

March: Eligible by Curtis Sittenfeld (CANCELLED, apologies to all)

August:  How the Garcia Girls Lost Their Accent by Julia Alvarez

May: The Invention of Wings by Sue Monk Kidd

Jan 2019:  The Tea Girl of Hummingbird Lane by Lisa See

July 2018:  Soul of an Octopus by Sy Montgomery

May 2018: A Closed and Common Orbit by Becky Chambers

March 2018:  Their Eyes for Watching God by Zora Neale Hurston

February 2018: Killers of the Flower Moon by David Grann

October 2017: A Gentleman in Moscow by Amor Towles

May 2017: The Girl on the Train by Paula Hawkins

April 2017: The Immortal Life of Henrietta Lacks by Rebecca Skloot

March 2017: The Other Wes Moore by Wes Moore

November 2016:  Poetry Night – Bring a poem for sharing and discussion

Maycomb, Alabama. Twenty-six-year-old Jean Louise Finch—“Scout”—returns home from New York City to visit her aging father, Atticus. Set against the backdrop of the civil rights tensions and political turmoil that were transforming the South, Jean Louise’s homecoming turns bittersweet when she learns disturbing truths about her close-knit family, the town, and the people dearest to her. Memories from her childhood flood back, and her values and assumptions are thrown into doubt. Featuring many of the iconic characters from To Kill a Mockingbird, Go Set a Watchman perfectly captures a young woman, and a world, in painful yet necessary transition out of the illusions of the past—a journey that can only be guided by one’s own conscience.

Written in the mid-1950s, Go Set a Watchman imparts a fuller, richer under- standing and appreciation of Harper Lee. Here is an unforgettable novel of wisdom, humanity, passion, humor, and effortless precision—a profoundly affecting work of art that is both wonderfully evocative of another era and relevant to our own times. It not only confirms the enduring brilliance of To Kill a Mockingbird, but also serves as its essential companion, adding depth, context, and new meaning to an American classic. – Amazon.com 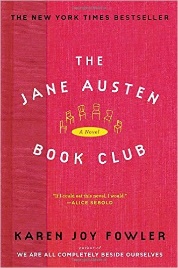 May 2016: I am Malala by Malala Yousafzai 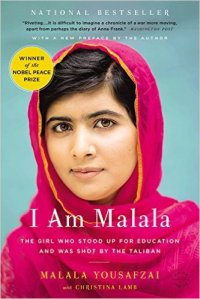 A MEMOIR BY THE YOUNGEST RECIPIENT OF THE NOBEL PEACE PRIZE

“I come from a country that was created at midnight. When I almost died it was just after midday.”

“When the Taliban took control of the Swat Valley in Pakistan, one girl spoke out. Malala Yousafzai refused to be silenced and fought for her right to an education.

On Tuesday, October 9, 2012, when she was fifteen, she almost paid the ultimate price. She was shot in the head at point-blank range while riding the bus home from school, and few expected her to survive.

Instead, Malala’s miraculous recovery has taken her on an extraordinary journey from a remote valley in northern Pakistan to the halls of the United Nations in New York. At sixteen, she became a global symbol of peaceful protest and the youngest nominee ever for the Nobel Peace Prize.

I AM MALALA is the remarkable tale of a family uprooted by global terrorism, of the fight for girls’ education, of a father who, himself a school owner, championed and encouraged his daughter to write and attend school, and of brave parents who have a fierce love for their daughter in a society that prizes sons.

I AM MALALA will make you believe in the power of one person’s voice to inspire change in the world.” – Amazon.com

WINNER OF THE PULITZER PRIZE

March 2016: All the Light We Cannot See by Anthony Doerr 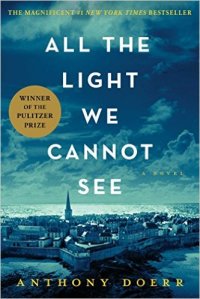 WINNER OF THE PULITZER PRIZE

From the highly acclaimed, multiple award-winning Anthony Doerr, the beautiful, stunningly ambitious instant New York Times bestseller about a blind French girl and a German boy whose paths collide in occupied France as both try to survive the devastation of World War II.

Marie-Laure lives with her father in Paris near the Museum of Natural History, where he works as the master of its thousands of locks. When she is six, Marie-Laure goes blind and her father builds a perfect miniature of their neighborhood so she can memorize it by touch and navigate her way home. When she is twelve, the Nazis occupy Paris and father and daughter flee to the walled citadel of Saint-Malo, where Marie-Laure’s reclusive great-uncle lives in a tall house by the sea. With them they carry what might be the museum’s most valuable and dangerous jewel.

In a mining town in Germany, the orphan Werner grows up with his younger sister, enchanted by a crude radio they find. Werner becomes an expert at building and fixing these crucial new instruments, a talent that wins him a place at a brutal academy for Hitler Youth, then a special assignment to track the resistance. More and more aware of the human cost of his intelligence, Werner travels through the heart of the war and, finally, into Saint-Malo, where his story and Marie-Laure’s converge.

Doerr’s “stunning sense of physical detail and gorgeous metaphors” (San Francisco Chronicle) are dazzling. Deftly interweaving the lives of Marie-Laure and Werner, he illuminates the ways, against all odds, people try to be good to one another. Ten years in the writing, a National Book Award finalist, All the Light We Cannot See is a magnificent, deeply moving novel from a writer “whose sentences never fail to thrill” (Los Angeles Times). – Amazon.com

Looking for upcoming events and activities? Check out the latest 2016 Calendar  here!

Will be posting soon!

This is a text widget. The Text Widget allows you to add text or HTML to your sidebar. You can use a text widget to display text, links, images, HTML, or a combination of these. Edit them in the Widget section of the Customizer.